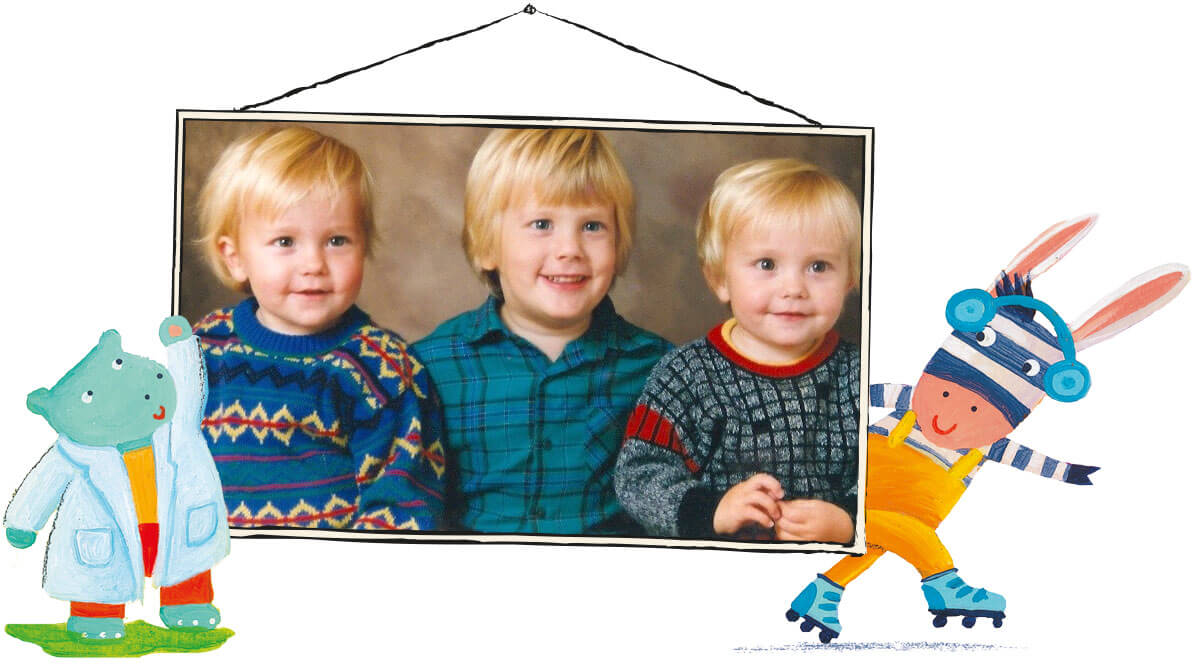 From an article I wrote for Your Cotswold Family magazine:

Oh, to return to the days when I could sit my boys on my knees, snuggle up and read them a story!  In their twenties they’re a bit old for that now, but we had such fun during those irreplaceable times when nothing else mattered outside of our intimate little huddle.

I was the editorial director of a well-known children’s book club and spent my days picking through publishers’ submissions to select the best for our nationwide audience.  I regularly took books home to review and sometimes sample with my sons.  As far as I was concerned, the boys were never too young to be read to, and it was fascinating to watch how their powers of memory, recognition and speech developed through familiarity and repetition.  Even at six months old, they would show genuine excitement when I picked up a board book and turned the pages in front of them, one image following another, one simple word or phrase accompanying each image and expressed by me with great gusto.  Those books were also chewed in the same way that everything else is explored in those early months, but babies soon learn that they don’t taste very nice and are destined for a much higher purpose.

According to Mem Fox, author of Reading Magic, reading with a child should start at birth.  In the early days, even though they won’t understand every word, they’ll hear new sounds, words and phrases which they then try out, copying what they have heard.  Believe it or not, by the time babies reach their first birthday they will have learned all the sounds needed to speak their native language, so the more stories you read aloud, the more words your child will be exposed to and the better their vocabulary will be.  By hearing speech patterns, learning that letters make the words that make up stories, and improving their understanding as they listen, children learn the vital skills needed for when they start to read.

The benefits of having parents and other adults read aloud to children have been quantified and recognised among the most important activities for children from birth.  Research published by the National Literacy Trust reveals a third of parents don’t realise they are the most important influence on their child’s language and literacy development, and these figures are further supported by the results of a new study commissioned by Disney, revealing less than a third of parents in the UK read to their children every day.  Half of the parents and grandparents of children aged six and under, agreed that story time allowed them to spend quality time with their child, although 29 per cent admitted they are too tired for stories, and the same percentage felt they got home from work too late to read to their children.

I would no sooner have missed our bedtime story routine than miss cleaning my teeth, not because it was a chore that had to be done, but because it was as enjoyable for me as it was for the boys.  I was astonished at just how quickly they were able to remember the stories and even individual words, to the point where I would be told off if I missed something out!  I used books to help them learn about different animals, transport, numbers, colours and the letters of the alphabet.  Books helped me to explain emotions and feelings, like anger, sadness, belonging, pain and joy, and to show what to expect from going to the doctor, moving house and starting school.

By the time my boys started school themselves, they were so confident with books that learning to read followed on naturally.  The tables were turned then, and I became the listener as they read to me, which was magical in itself, because I find the whole process whereby young brains learn to decipher little black squiggles on a page quite extraordinary.  We continued with bedtime stories, of course; none of us were prepared to give up those special moments.

I cannot imagine what it must be like for children who have never been exposed to books to arrive at school and have to decipher those little black squiggles, before they have experienced the joys that lie between a book’s covers.  For some, it must forever be a chore, especially if they come from a home where books have never been embraced.  And yet, the ability to read is paramount in everything we do; even mundane things like finding our way somewhere, applying for broadband, booking a holiday or renting a flat.  As for making progress in school subjects other than reading, how on earth is that possible when all subjects rely upon the written word – whether in a book or on a screen – to transmit information in a way that’s comprehensible?

For me, as a single, working parent, there was very little that was more sacred than reading to my children, and I allowed nothing to get in the way.  I don’t buy into the excuse that some people make of being too busy.  We’re all busy, but it’s a question of priorities.  Often it’s a case of making a small sacrifice, like missing a favourite TV programme, but for me that was a no-brainer, after all, what’s more important – a child’s emotional, intellectual and physical development, or the latest episode of Deadenders?  As for any argument about the affordability of books, they’re free from libraries.  It just requires a bit of effort to go and get them.

Perhaps some parents worried they won’t do a good job.  Now think about it: what an amazing opportunity us parents have to indulge our acting skills in front of a loving and enthusiastic audience!  I used to leap off beds, roll on the floor, laugh like a lunatic, hop, skip, dance, and adopt a variety of voices and accents that zigzagged haphazardly from one part of the British Isles to another – but who cared?  My boys didn’t know the difference and they were delighted to join in the fun.

My three sons are all very sporty, and there’s no doubt that books took more of a back seat while they were chasing or walloping balls of various shapes and sizes, but they’ve never lost their love of reading.  What’s more, they’re all capable of challenging me, and beating me at word games now; something that makes me immensely proud.  We may not have bedtime stories anymore, but there’s nothing like a good game of Scrabble or Upwords at Christmas to create more irreplaceable times.

With research giving us hard facts that learning at home is the biggest influence on the achievement of children and the fact it is a far more accurate predictor of a child’s success than the family’s income, it’s clear that the rewards of reading with children are immeasurable.  What better start can we give our children than a love of books that will set them up for life?  It’s not just about words.  It’s about the wonderful imaginary worlds, the general knowledge and the chance to experience other cultures and discover all sorts of amazing things about themselves that will give them the confidence to become awesome citizens of our world.  Isn’t that something every parent should want?