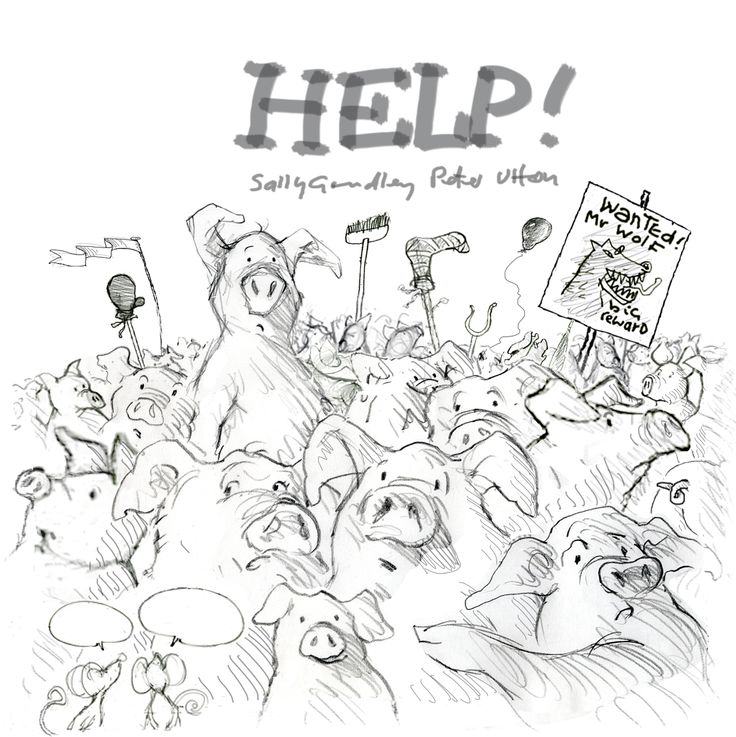 On working with Peter Utton – part 2

I had more fun putting together my new book, HELP!, than any other book I’ve ever< written. I say ‘putting together’, because it was more like working on a jigsaw puzzle than writing; there were so many different elements to think about. And it was a further opportunity to collaborate with my favourite illustrator, Peter Utton. Shortly after returning home, an idea began to germinate around The Three Little Pigs. I played with it, found the twist I was looking for, decided which elements from the previous two books I wanted to keep, created new elements like the mice narrators, turned the ending on its head so that instead of confining danger within the pages of the book, the danger would be ejected from the book (bye bye Big Bad Wolf!), defined the role of the reader – the reader has an important role in each of these books – and when I had consigned enough to paper I talked with Peter. He ‘got it’ immediately and set to work producing two full pages of roughs and some character sketches, adding lots of humorous touches of his own. HELP! was on its way! We had been invited back to Belgium to attend the Belgian Book Fair, and whilst there we showed our Editor at Pastel what we were working on. She ‘got it’ immediately as well, and with her on board we were able to approach our English publisher as a united unit. How could they turn us down? There was a lot of huffing and puffing about the cost of producing a larger format and whether in fact the idea for the book worked – of course it did! - but at last we had our way, not least because Pastel were prepared to buy a large number of copies! Now that finished copies of HELP! are available, everyone is absolutely delighted with it and, guess what, I’m working on ideas for number 4! Once again, I shall be collaborating with Peter all the way, and having a lot of fun.