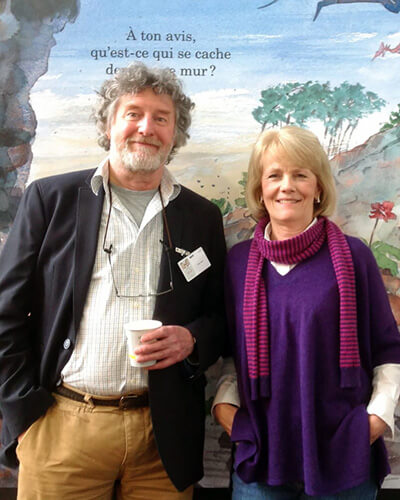 On working with Peter Utton

Publishers are often very good at keeping authors and illustrators apart – something to do with preventing the author from unduly influencing and possibly inhibiting the illustrator.  From what I remember, Peter Utton and I didn’t meet during the creation of our extremely successful book, SHHH! (published in 1991).  I submitted the manuscript to my publisher with notes on how the illustrations should work with the text, and from then on all communication was via the publisher.  Peter sent in roughs for his artwork, which were forwarded to me for comment and returned to him via the publisher for any mutually agreed alterations.  However, SHHH! is perfect in its simplicity and required very little to-ing and fro-ing in order to marry up words and pictures, so the subject of talking to Peter didn’t really arise.

KEEP OUT!, our follow-up to SHHH!, was conceived some twenty years later and published in 2013.  KEEP OUT! is a good deal more complicated in its structure and required a lot more thought in terms of how the illustrations should work with the words.  I was determined that this time I would have direct contact with Peter, and we did indeed email/phone on a regular basis.  Each time Peter put pencil to paper, he would send me sketches and I would tweak the text over and over again to make sure that it was as tight and relevant as possible.  Even in the very final stages of production, I made one or two tiny changes, because when the colour illustrations were in place they inspired new thoughts.

Our Belgian publisher, Pastel, invited Peter and me to do a book-signing tour in France and Belgium, in order to promote KEEP OUT! and to meet the numerous fans of SHHH!, which has become almost a cult book in both countries.  It was the most time we had ever spent together, despite the fact that we had previously worked on a handful of other titles as well as SHHH!  We were able to bounce ideas off each other, and there’s no doubt we share similar creative aspirations and a very similar sense of humour.  That, combined with the enormous enthusiasm for our work displayed by our editor at Pastel, left us determined to come up with a new book, linked to SHHH! and KEEP OUT!, but with a least one major difference – it was going to be bigger!  We had seen lots of books published by Pastel in larger formats than are the norm in the UK, and we were determined to have our way and buck the norm.