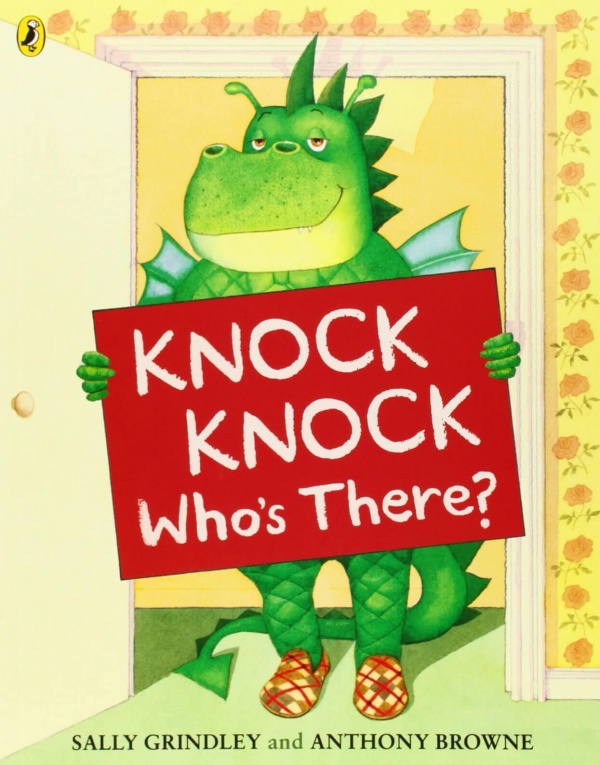 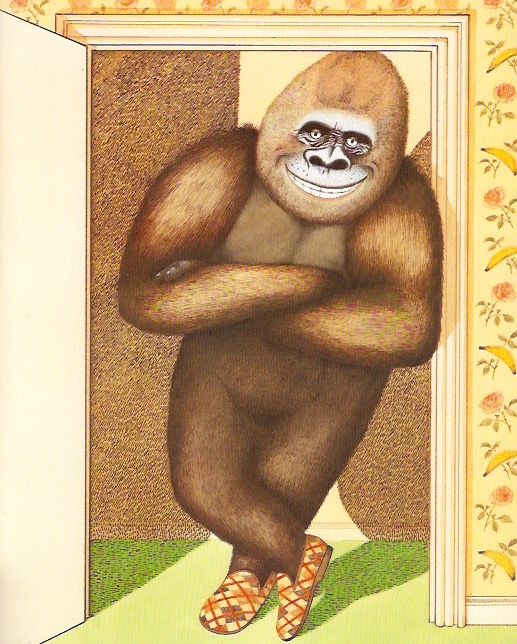 ‘A little gem of a book.’  Michael Rosen

‘Published some years ago now and remains one of the most eagerly sought-out picture books for toddlers.’  Lovereading4kids

Just who is that knocking at the little girl’s bedroom door, and what will happen if she lets them in? One character after another appears, each one threatening to spook, cook or tread on her. Not surprisingly, she woCuriously, though, they’re all wearing the same pair of slippers!

This was my second book, published in 1985 and still a great favourite when I perform it in schools. I was lucky that the much lauded Anthony Browne liked it enough to want to illustrate it – he’s done a great job.

1)  The slippers are an important visual clue throughout to who is really outside the door.

2)  There are individual visual clues to indicate in advance which character is waiting outside the door:

3)  The visual images on the girl’s bedspread change throughout, and less and less of the bedspread is visible as the girl shrinks further and further down the bed in mock fear of what’s outside the door.

4)  It is of course Daddy all the time, playing a game with his daughter, and the slippers as well as being an important clue are there to allay any fears.

Encourage participation by getting children to take the part of the girl, in which case they will call out ‘Who’s there?’ and ‘Then I won’t let you in!’ Apart from anything else, that gives them control of who is allowed through the door (important for those of a nervous disposition, though the book is only mildly scary!). At the end, invite children to remember in which order the different characters appeared, and then ask how they know it was Daddy all along. Where have they seen the slippers before?

Encourage children to think of other characters that might be lurking behind the door, and to describe those characters in a similar way to those in the book, e.g. fierce, scaly dragon, as well as imagining what the characters will do if they are allowed into the room (cook you for my tea). This is also a great opportunity for children to draw their creations.