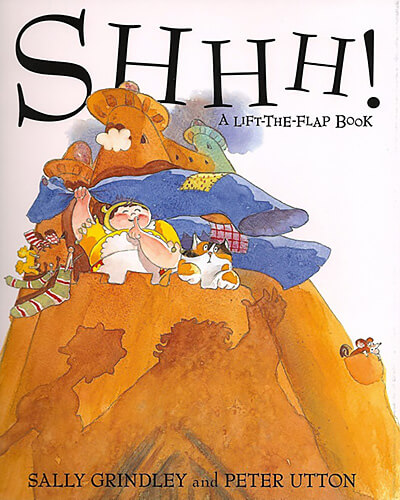 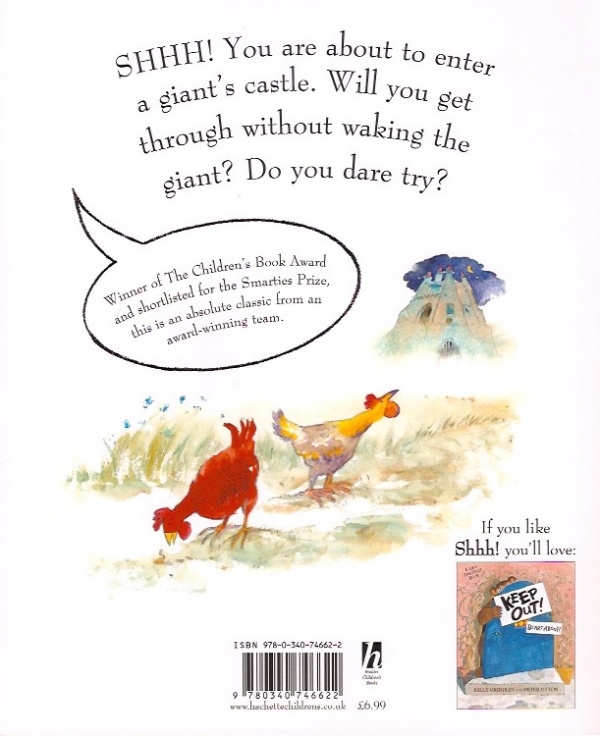 ‘A real original… the whole builds to a wonderful climax, eliciting squeals of delight… it bears endless repetition.’  Susan Hill, The Sunday Times

‘Some of my son’s favourite picture books rely heavily on the suspenseful build-up of fear. Shhh!, in which the reader, by means of peepholes and flaps, creeps closer and closer to the sleeping giant, is one of them.’  Financial Times

‘With its understated text and imaginative artwork, this unusual work draws readers into story and setting in a way that few picture books can.’  Publishers Weekly

‘I love the illustrations, with tons of detail and magical things for children to spot. But the true joy of this book is the way it reinvents the way children respond to and interact with a book. It invites them in, right in to the story and the setting. It asks them to get involved and encourages them to play.’  Rhinoreads

From the moment you pick up this book, be quiet, be very quiet. It’s really a giant’s castle, but you won’t find out until you’re inside. And what about the giant? Well, if he catches you he’ll eat you for his tea! Don’t say I haven’t warned you! Of all the books I have written, this is probably my favourite, and I love reading it out loud to groups of children – out loud in a whisper, that is.

1)  As you go from page to page in the book, you are going from room to room in the castle, including upstairs.

2)  The illustrations have clues as to what you will find on the next page. Look at where the cheese is by the table leg, turn the page and there is the mouse.

3)  There are some strange things in the illustrations, like a tongue sticking out of the teapot and hands gripping the edge of the teacup.

4)  There are bones on the floor of the giant’s dining room, perhaps from someone who made a noise while going through the book (castle) and was eaten!

5)  The flap cuts in the pages should be opened to look back at the previous page, not to look forward, and to check that the giant’s pets and wife haven’t moved. Of course, when it comes to the giant himself, the device has to change in order to show him awake. In this case, there is a straightforward stuck on flap, covering his eye, until it is opened – eek!

1)  The book is called Shhh! Demand quiet from your audience and tell the story in a quiet voice. Have fun admonishing for coughs, sneezes and other random noises.

2)  The odd giggle from you, at the fat mouse for example, will encourage a bit of noise from your audience, allowing you then to say Shhh!

3)  Your listener/s might be a bit hesitant about saying Boo to the giant. A little persuasion always works – tell them to be brave – and then as you hurry to turn the page before the giant can catch you, scold them saying you didn’t mean it!

4)  You’re all of a flurry reading the last two pages, and shutting the book to keep the giant in should be a major event: slam it!

1)  Talk about other giant stories, for example Jack and the Beanstalk.

2)  Point out all the clues in the pictures if you haven’t done so before, and the use of perspective and scale. (The bread is being cut with an axe, for example.)

3)  Talk about the gatefold – the wide opening page at the beginning of the book – and why it has been used in the book (as a door and as a device to give scale to the giant’s castle). How might it be used otherwise? To show length – a crocodile? Opened upwards to show height – a giraffe? A tall building? Opened downwards – to go under the sea or into a basement?

4)  Talk about the use of flaps in books and how they can be effective.